Research is an integral part of the activities of Panimalar institute of technology. The institute conducts researches within its academic programmes under all the departments. It has a well-established research and development center with state-of-the-art facilities. Students and faculty conducts research projects in major areas of science and engineering. The major areas in which research activities are carried out are as follows:

Panimalar Institute of Technology with its vision of being a social partner for the development of country through its involvement towards research to innovative newer technology in research and development activities. The R & D team of PIT is committed to excellence in the area of research. The dedicated research team adds its strength and spreads its roots over diverse areas like Big Data, Cloud Computing, CAD/CAM, Information Technology, Knowledge Management, Electronics and Communication. By knowing the need of research in multi-form and demand in emerging fields, the key ultra-tech disciplines of the future are focused on with thought provoking spirit.

Our College team Vyuha, sponsored by Panimalar Institute of Technology have won the National Competition on Student Autonomous Underwater Vehicle (SAVe 2012) conducted by NIOT on 30th April 2012. The Vyuha AUV is the very first endeavor of the team vyuha consisting of undergraduate students from three different colleges and three different streams. The team emerged as the winners in the national level AUV competition SAVe conducted by National Institute of ocean technology. After winning the SAVe’2012 competition the team has redesigned the vehicle concerning about the racy and efficacy of the vehicle. Our team Vyuha has participated with their redesigned vehicle in the 15th International RoboSub competition organized by Association for Unmanned Vehicle Systems International (AUVSI) and US Office of Naval Research (ONR) at the U.S. Navy’s Space and Naval Warfare Systems Centre (SPAWAR) TRANSDEC Facility in San Diego, California, USA during July 2012. 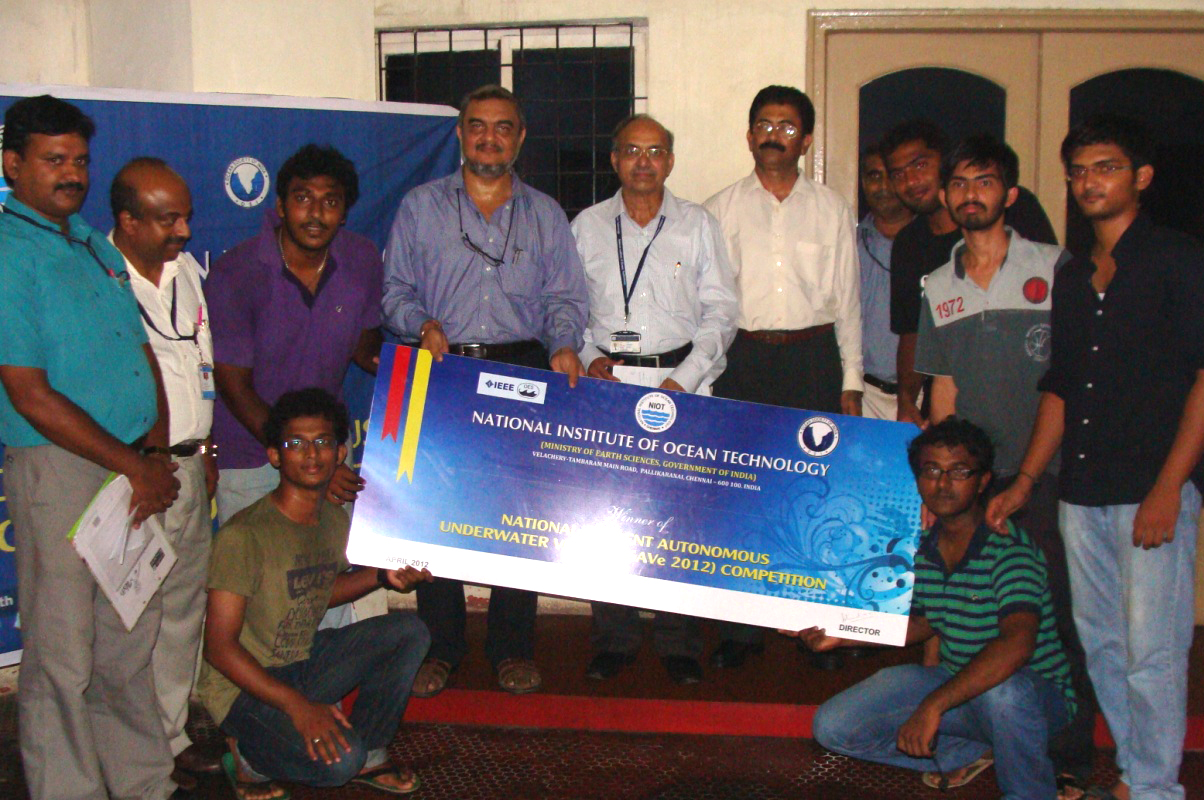 Anna University, Chennai and Surprise Solutions, jointly Organized the event Demanding Hero for an Organization with Novel Intelligence (DHONI) 2015 during February 16 to March 15, 2015, for Under Graduate and Post Graduate students. It was the PENULTIMATE management competition and provided a platform that helps students go beyond the books and apply their knowledge in real life situations. The team SPARTANS from ECE Department of Panimalar Institute of Technology secured the Winner’s trophy among 192 teams from various colleges. The prize distribution ceremony was held at Panimalar Institute of Technology, Chennai on September 19, 2015. Dr.G.Ravikumar Director, Centre for Entrepreneurship Development (CED) of Anna University, Chennai, Dr.P.Chinadurai,M.A.,Ph.D, Secretary and Correspondent, Mr.C.Sakthi Kumar,M.E., Director , Panimalar Group of Institutions were presided over the function and distributed the awards.

The Singapore AUV challenge aims to provide students an opportunity to experience the challenges of AUV system engineering and develop skills in the associated technologies. The focus is on autonomous operations in a swimming pool format, rather than remote control in a small tank, and it is aimed at University and Polytechnic students. The Singapore AUV challenge emphasizes on outreach, learning and skill development. The competition is open to Singapore and international participants. The team from Panimalar Institute of Technology, have consistently participated in the SAUVC during the years 2013,2014 as well as in 2016 and got appreciated for their team effort and cost effective design and compactness of their design.

Radio Frequency sumo robot is designed in a way which could push its opponent out of the ring by just using the body design and motor power. The robot was controlled using radio frequency of 2.4 GHz .The body was designed in such a way that it doesn’t use any projectile objects to damage its opponent’s robot and it pushed the opponent’s bot away using the power of the motor and the ramp which was placed in the front. The rotation speed was 200 RPM and the torque was between 30-40 kg. Xbee board has been used in order to program the device. The diameter of the wheels was kept as 10.2mm and was mounted in the motor shaft of 8mm diameter. 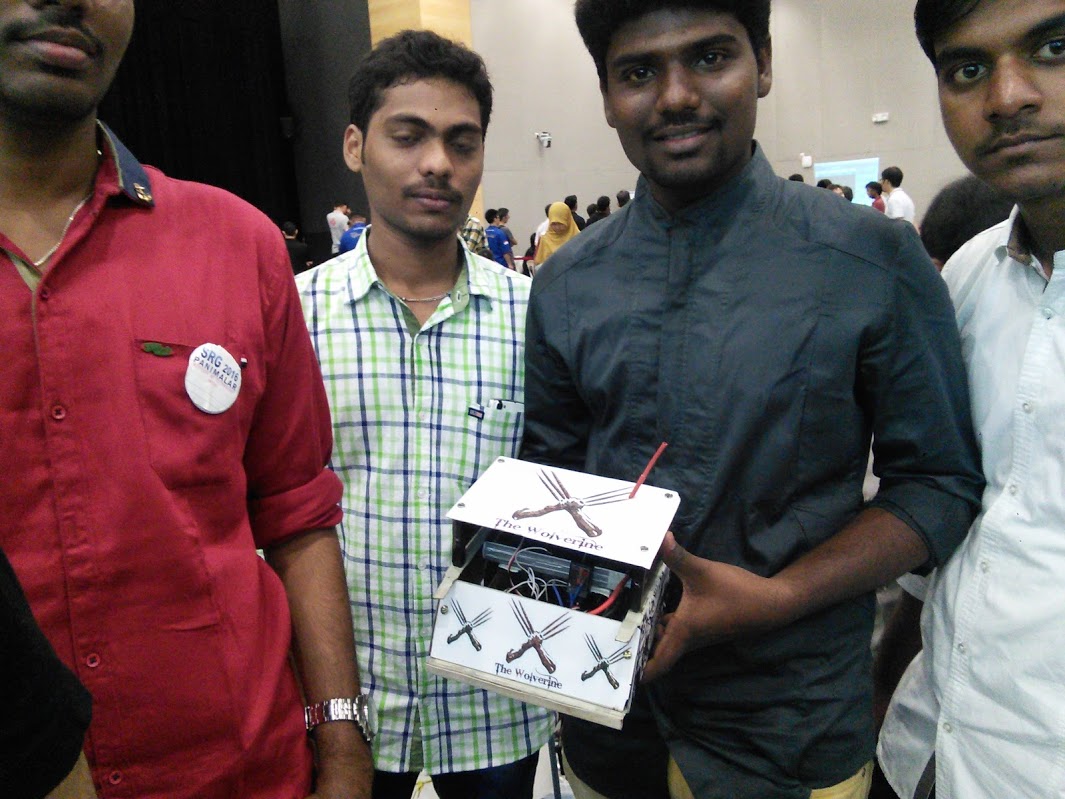 Climbing robots could be used on artificial surfaces like a wall, or on natural surfaces like trees or cave walls. They are desirable for several applications such as search and rescue. This phenomenon is still a challenge to be achieved using robotic devices. Climbing robots should have some practical utility to deal with different surfaces and geometries. This can be achieved by the use of special purpose attachment devices such as magnets or suction. At the same time, the machines need to be power autonomous, to avoid the hazard and the limitations of a tether. A wall climbing robot can be used for numerous functions such as surveillance, construction, maintenance, search and rescue. The robot’s locomotion has been performed using servo motors and adhesion to wall is performed by sticking using suction cups. The detailed design is modeled and fabrication is performed. It utilizes 4 legs, each with two degrees of freedom. And a central box containing the required mechanisms to perform the locomotion and adhesion is designed to carry any device to perform works on wall. 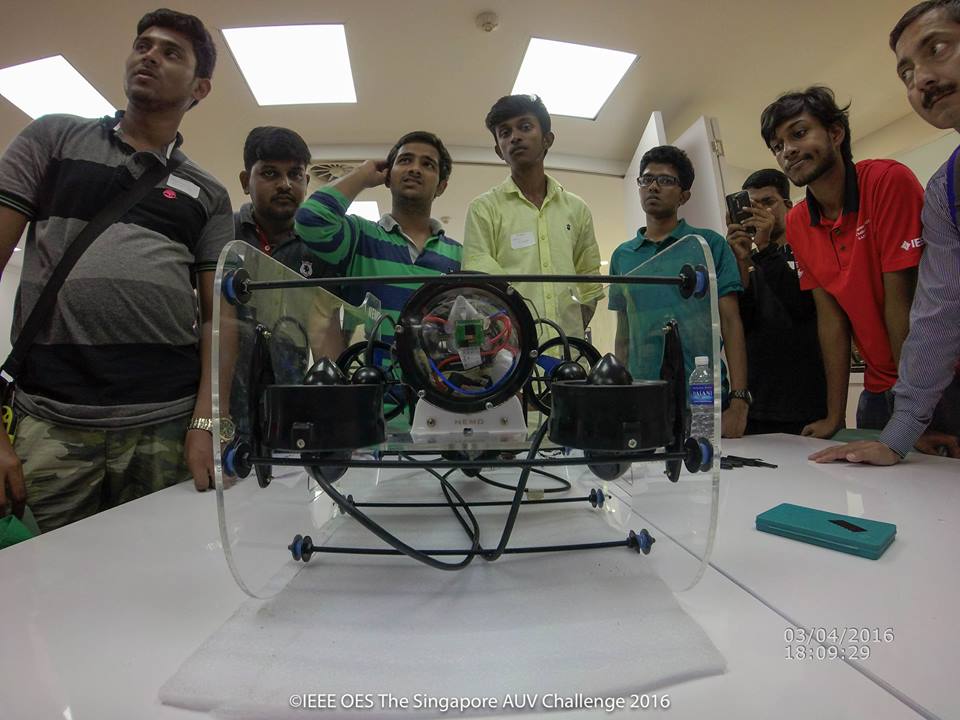 A remotely operated underwater vehicle (ROV) is a tethered underwater mobile device. This meaning is different from remote control vehicles operating on land or in the air. ROVs are unoccupied, highly maneuverable, and operated by a crew aboard a vessel. They are common in deep water industries such as offshore hydrocarbon extraction. They are linked to a host ship by a neutrally buoyant tether or, often when working in rough conditions or in deeper water, a load-carrying umbilical cable is used along with a tether management system (TMS). The TMS is either a garage-like device which contains the ROV during lowering through the splash zone or, on larger work-class ROVs, a separate assembly which sits on top of the ROV. The purpose of the TMS is to lengthen and shorten the tether so the effect of cable drag where there are underwater currents is minimized. 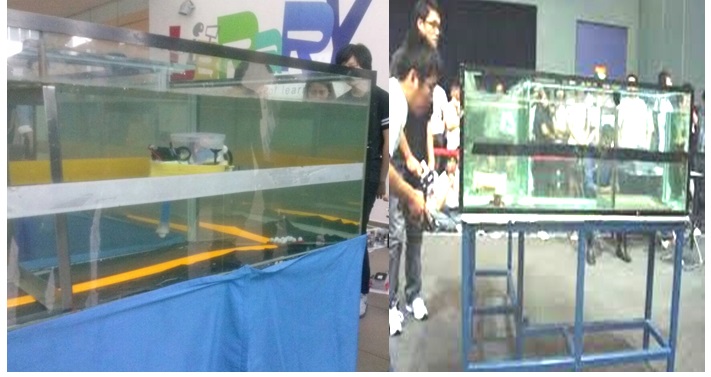 Everything starts with a problem which we ourselves experienced last December 2015 when Chennai suffered a massive flood disaster. Even though we had relief materials like milk, water, candles, food in surplus, we were unable to distribute them to the needy at their place at the right time.

We had analyzed many solutions, but most of them could not be implemented by local social welfare bodies and NGO’s due to various reasons. We, on the other hand, wanted to pool our engineering skills for a social cause. We were triggered by an idea whereby we could deliver basic medical amenities and emergency relief materials using Drones. Drones have been in operation throughout the world in various environments and locations but we the technical people, who are known for our practical problem solving capacity, designed our customized drone in a cost effective manner.

‘’Team Dronix’’ from Panimalar Institute of Technology, Chennai, after one year of hard work, developed the “Octocopter’’, which in other words is an unmanned helicopter having eight rotors. A specially trained controller flies the Octocopter across terrain which may not be accessible by traditional means. On receiving a distress call from any victim or patient, our base station immediately sends out a multi-rotor Octocopter, to the spot, after tracking down the location of the signal. Within a matter of minutes, the payload is dropped off at the specific location and the Octocopter automatically returns to its base. It can carry weights up to 10 Kg, and fly within 2.5 Km aerial radius at a speed of 65 Km/H with an air borne duration of 20 minutes. We have also included an external obstacle detector to avoid collisions as well as a camera for aerial surveillance. An amount of INR 85,000 had been incurred to design our drone, whereas the cost of an industrial drone in the open market costs nearly INR 3 lakhs. We successfully demonstrated our idea both inside as well as outside our campus.

For details information kindly visit www.teamdronix.com and watch the YouTube channel ‘teamdronix’ for the demonstration videos.